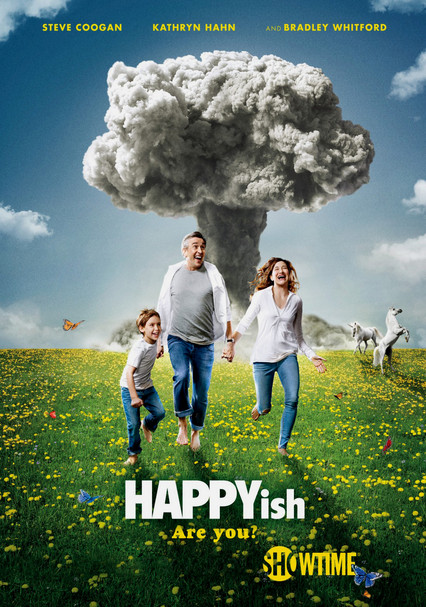 2015 TV-MA 1 season
Already smarting from the pain of his 44th birthday, adman Thom Payne arrives at work to meet his new boss: a jargon-spewing 25-year-old whose advice to Thom is that he rebrand himself ... but how?

At the crest of middle age, adman Thom Payne is disappointed and confused by the joyless state of his life. Working for a boss half his age is part of the problem, but Thom's family life could use a makeover, too.

Parents need to know that HAPPYISH is a mature comedy aimed at middle-aged adults that uses frank, unbleeped language of every shade -- from "motherf--ker" to "p---y." Sex (or the absence of it) is a common theme, so you'll see some simulated sex acts (including the seduction of an animated Keebler elf) along with adult characters drinking and smoking pot. There's some cartoonish violence, too, but any blood is played for comedy.

Violent acts played for comedy; some blood, but it's cartoonish.

Major themes include the inevitable disappointment and hopelessness of adulthood; the pursuit of "happiness" is, at best, a fool's errand and, at worst, completely impossible.

Keebler plays a prominent role in the pilot; other brands include Samuel Adams, Coca-Cola, Facebook, and Twitter.