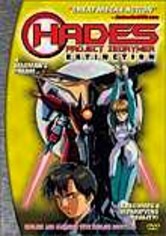 1995 NR 1h 0m DVD
Genetically engineered teen Masato tries to break free of his tragic destiny and save the world in episodes 3 and 4 of the anime series. Created by a madman who wants to control the world, Masato is torn from the only life he knows and thrust into the job he was designed to do: Pilot the robot Zeorymer on a course of destruction. With the fate of the world at stake, Masato must overcome his genetically engineered demons before it's too late.