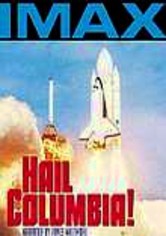 1995 NR 0h 36m DVD
One of the first Imax-format films, Hail Columbia! details the amazing maiden voyage of Columbia, the world's first space shuttle. You'll go behind the scenes for last-minute preparations with astronauts John Young and Robert Crippen, tremble to the ground-shaking liftoff and cheer the triumphant touchdown at mission's end. The film also features footage of the launch shot from an airborne 747 and a montage of later shuttle liftoffs.