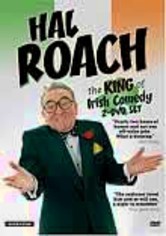 2005 NR 2 discs
In his long career as a studio kingpin, Hal Roach worked with the greatest comedians the film world as ever seen, including Laurel & Hardy and Harold Lloyd. Indeed, Roach's sharp eye for talent led to his unearthing an amazing cache of comedic talent and resulted in some impressive movies with none other than Roach at the helm. Illustrated are Roach's myriad of talents and shows why he was regarded as the "king of Irish comedy."