Haldane of the Secret Service 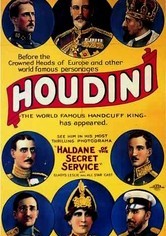 Haldane of the Secret Service

1923 NR 1h 24m DVD
A silent feature, archival footage and a rare film excerpt capture famed escape artist Harry Houdini in some of his most exciting on-screen antics. In his final film, Haldane of the Secret Service (1923), Houdini plays a man who goes undercover to expose a ring of Chinatown counterfeiters. Bonus material includes a recovered fragment of The Grim Game (1919), plus historic recordings of actual Houdini escapes and vintage audio clips.