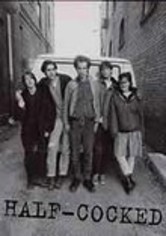 1994 NR 1h 30m DVD
It's a night of music and misadventure in these two indie road films. In the comedy Half-Cocked, Rhoda and her friends unexpectedly form a punk band after stealing a van loaded with music equipment and wind up on a cross-country tour, while the drama Radiation follows unlucky music promoter Unai as he hits the highway to escape his problems, leaving a band stranded at the airport and an angry drug dealer in his wake.