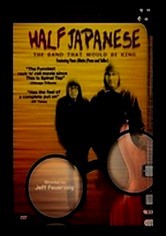 1993 NR 2h 0m DVD
Hyped as "the world's greatest underground band," Half Japanese is fronted by Jad and David Fair, a gonzo "Wayne and Garth" musical duo. The Fair brothers record punk tunes in their bedroom for mail-order distribution. Although rabid fans and enlightened critics don't necessarily augur a new Beatlemania for the eager rockers, the Fairs press on because breakout fame may be just around the corner.