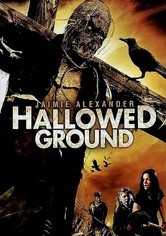 2007 NR 1h 23m DVD
In this hair-raising thriller, Liz Chambers (Jaimie Alexander) finds herself stranded in a small Midwestern town and soon begins to suspect the residents are experimenting with evil, supernatural forces. The conspiracy grows even more complicated when Liz learns the long-dead preacher who founded the town a century ago predicted her arrival -- and that she's expected to play a critical role in a dark ceremony that will bring him back to life.