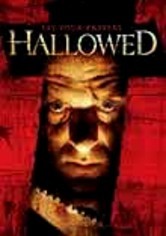 2006 R 1h 25m DVD
After watching his mother die at the hands of his father, traumatized 10-year-old Gabriel (Corey Foxx) grows up to become -- what else? -- a psychopath. Not your garden-variety wacko, Gabriel, who believes he's on a divine mission to slay the faithless, masquerades as a clean-cut, door-to-door proselytizer. Rosslyn Roberson, Andrew Martin and Richard Meese co-star in this bloody slasher flick helmed by Rocky Costanzo.