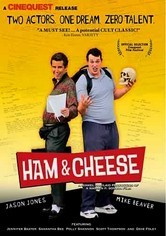 2004 NR 1h 28m DVD
With a surplus of enthusiasm and a serious scarcity of talent, pals Barry and Richard (Jason Jones and Mike Beaver) pursue acting careers in Toronto, an endeavor that turns out to be much harder -- and weirder -- than they expected. Director Warren P. Sonoda's mockumentary, which scored six nominations at the Canadian Comedy Awards, also features hilarious cameos by "Kids in the Hall" alums Dave Foley and Scott Thompson.