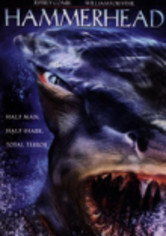 2005 R 1h 32m DVD
Kicked out of the mainstream scientific community as punishment for his wild ideas, a brilliant scientist has set up shop on a remote island, where he conducts experiments in stem cell research and DNA manipulation. But his most recent experiment -- a hybrid creation that's half man, half shark and able to hunt for food on both land and sea -- is a real killer. And the only way to stop it is to destroy it. Jeffrey Combs and William Forsythe star.