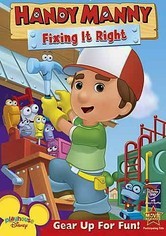 2008 G 0h 58m DVD
Handyman par excellence Handy Manny (voiced by Wilmer Valderrama) puts his gang of talkative tools to work tackling the problems of the Sheet Rock Hills community in these episodes from Disney's popular animated series. Join the fun as Rusty, the monkey wrench, conquers his fear of heights to fix a jungle gym; handsaw Dusty figures out the mystery behind the disappearing socks; and hammer Pat devises a smart solution to a supersized problem.