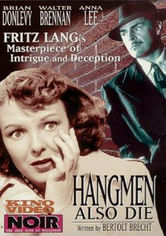 1943 NR 2h 14m DVD
During the Nazi occupation, Czech resistance fighter Franticek Zvoboda (Brian Donlevy) does his part to defend his country by assassinating Nazi-installed dictator Reinhard Heydrich in this World War II thriller helmed by Fritz Lang. But after Zvoboda finds sanctuary with a fellow Czech patriot (Walter Brennan), the Gestapo threatens to murder 400 of Prague's residents if the killer refuses to step forward.