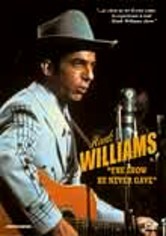 1981 NR 1h 26m DVD
This fictional "concert" follows the late Hank Williams (played by actor-musician "Sneezy" Waters) through his final performance in 1952, just before his death in a New Year's Eve car crash. Over the course of 23 songs, director David Acomba peers into the mind of the self-destructive superstar who left behind a new bride, an ex-wife and a namesake son. Dixie Seatle, Jackie Washington, Sean Hewitt and Sean McCann co-star.