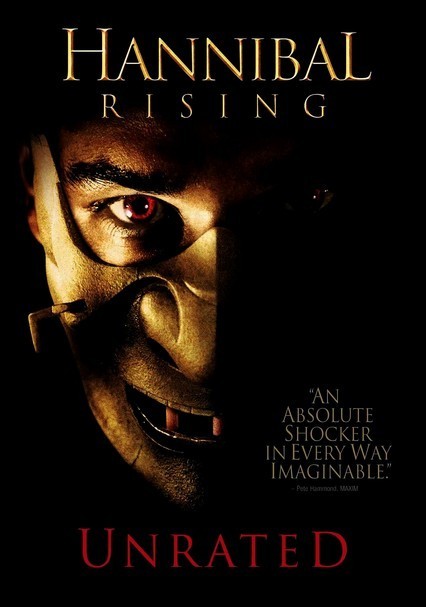 2007 UR 2h 11m DVD
Director Peter Webber takes on the myth of the menacing Hannibal Lecter in this terrifying prequel that attempts to trace the murderous roots of the cannibalistic killer, beginning with his hardscrabble childhood in Lithuania.

Parents need to know that this bloody Silence of the Lambs prequel isn't for kids. Since it's about the "birth" of famously evil character Hannibal the Cannibal, it's no surprise that it's all about brutality (usually involving swords and knives) and cannibalism. Other violent scenes include wartime shootings and explosions, stabbings, decapitations (heads are prominently displayed and bloody), and a drowning (a man is locked in a hospital corpse tank). Villains also drink, smoke cigarettes, and abuse women (bruises on one victim). A few uses of "f--k," plus rude sexual slang.

Sexual attraction between Hannibal and his aunt by marriage (brief, passionate kiss between them); verbal references to Lady Murasaki's "p--y" Grutas keeps a sex slave and forces her to bathe him in a tub; he appears out of the tub with a towel around his waist; Grutas licks Lady Murasaki's face, then puts his finger near her crotch and straddles her on a chair (very ugly threat of rape).

Brutal violence and bloody results. Wartime explosions, shooting, fires. Children witness their mother's fatal injury in an explosion, and their father is shot dead in front of them. An SS officer is shot in the head; wolves eat dead parents; Grutas eats a bird, showing his bloody mouth; Grutas threatens children with hatchet; villains eat little sister (off-screen, but fragmented memory repeats throughout, with screams and disturbing images); stabbings with forks, knives, swords; martial arts with poles; bloody wound stitched in close-up; several decapitations; repeated references to losing families in war; villain is squeezed to death by rope (blood splats on Hannibal's face, and he tastes it); Hannibal drowns a man; Grutas shoots Hannibal and another character; fight includes burning hand on stovetop; head is stabbed from chin through the top (seen from back); man squished between boat and dock (end is off-screen); Hannibal stabs villain's legs repeatedly, carves "M" in his chest, then eats his cheeks.