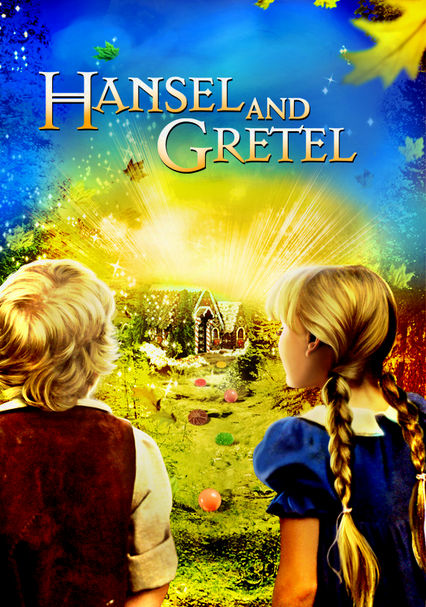 1987 NR 1h 26m DVD
A love of sweets leads Hansel (Hugh Pollard) and Gretel (Nicola Stapleton) to danger in this live-action version of the classic Brothers Grimm fairy tale. Song-and-dance numbers add pizzazz to the tale, which follows the siblings' adventure as they get lost in the forest. They come across a splendid gingerbread house, but their host turns out to be a hungry, child-eating witch (Cloris Leachman), and they must find a way to escape.

Parents need to know that Hansel and Gretel is not the 2013 R-rated theatrical release Hansel & Gretel: Witch Hunters. Many parts of this live-action fairy tale may be frightening for very young or sensitive kids. The wicked witch is portrayed with blackened teeth and fingernails, warts on her face, wild white hair, and a pointed chin. She's sometimes shot in extreme close-up, with intense eyes glaring into the camera, wild hair flowing, bared teeth, and a cackling laugh. A duck is dropped into a cauldron of boiling water and then into a fiery oven. In the climactic scene, the wicked witch is sent into the boiling pot, then into the oven, and finally is blown up. Other scenes take place in a dark forest and are infused with sounds of ghostly laughter, pleading voices, and pitiful shrieks. Hansel and Gretel's mother is distraught and angry early in the film and berates her children and husband continually.

Lots of scary sequences involving an ugly, cackling witch who wields a knife while threatening two lost children with death and the fact that she's planning to fatten them up and then eat them. Ghostly sounds, laughter, and cries for help emanate from a dark forest in several scenes. A duck is boiled and then tossed into a fiery oven. The witch herself suffers the same fate. The witch's gingerbread house blows up and melts, erupting as a volcano with flowing green and red goo. Reference is made to the fact that children have been disappearing in the woods.

The children are called names by both their mother and the wicked witch: "stupid," "worthless idiot," "foolish boy," etc.

Even in what looks like an extraordinarily bleak situation, thoughtful planning and teamwork can save the day. Ignoring rules can get kids in trouble.