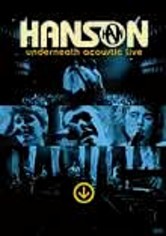 2004 NR 1h 30m DVD
Shortly after the end of the 1990s, the Hanson brothers (Isaac, Zac and Taylor) began the transition from the saccharine sounds of their childhood into a more evolved, developed musical style. This concert video, shot during their 2003 tour, showcases "unplugged" versions of many of their songs. Although much of the set list is from their third, more serious album, it also features some of their pop gems, such as "MmmBop."