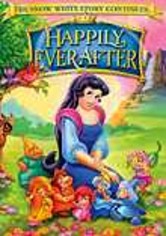 1993 G 1h 15m DVD
A variation on the treasured fairy tale "Snow White," this story follows Snow White and her Prince as they try to escape the evil clutches of the now-deceased evil queen and her equally wicked brother, Lord Maliss. Posing as a dragon, Lord Maliss goes after the couple, who seek refuge with the Seven Dwarfs' cousins, the female Dwarfelles. The film features the voices of Irene Cara, Ed Asner, Phyllis Diller and Tracey Ullman.