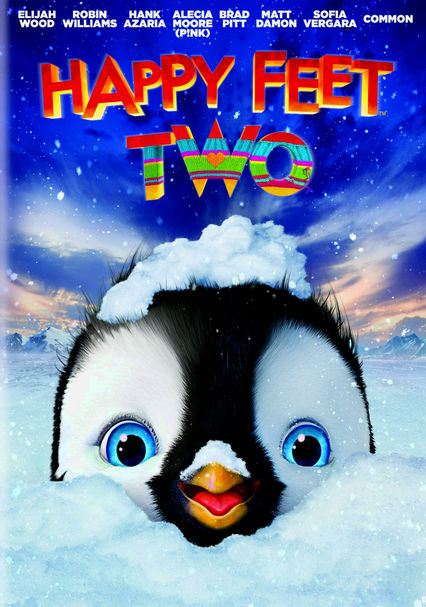 2011 PG 1h 39m Blu-ray / DVD
Mumble, the tap-dancing penguin who can't carry a tune, returns in this sequel to the hit animated musical. This time around, Mumble has a son. But unlike his toe-tapping father, young Erik has two left feet and struggles to find the groove.

Parents need to know that this sequel to 2006's Academy Award-winning animated adventure Happy Feet features many of the same environmental and family lessons for audiences. Global warming's impact on the penguin characters is again addressed; the peril that comes with natural disasters may frighten the youngest of viewers -- as could some scenes with large/menacing elephant seals and predatory skua birds. There are also a few mild innuendos from the penguin voiced by Robin Williams, and some viewers may interpret the relationship between two male krill as having gay undertones, particularly when Bill suggests they start a swarm of their own. But ultimately this is a tale of family, friendship, and what it means to find your individual voice -- your own special gift.

Penguin mates Mumble and Gloria embrace. Ramon is smitten with the beautiful Adelie penguin Carmen and calls out to her "You, me, egg, now!" in a suggestive way. They flirt throughout the movie.

An iceberg traps the penguins in a snow valley that they can't climb out of, and a couple of times the situation looks dire for them. The krill are eaten by whales and other fish, so Will and Bill realize that they're at the bottom of the food chain. A huge elephant seal looks poised to harm Mumble, Eric, and their pals but then falls off a cliff and requires assistance. Two male seals battle for dominance. The predatory skuas try to peck at the penguin chicks.

Like the original, the sequel features a strong environmental message and also encourages parents to let their children believe in possibilities and follow their passions. Kids will also learn the importance of helping others and how every individual can make a huge impact.

Nothing in the actual movie, but merchandise tie-ins are available in stores.