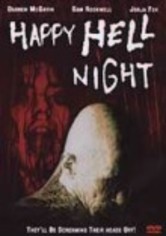 1992 NR 1h 27m DVD
A psychotic serial killer escapes from an insane asylum in this slasher. Nearly 30 years ago, man-of-the-cloth Father Malius (Charles Cragin) brutally murdered several college students. Now locked in an asylum, Malius awaits his chance to escape -- a chance that comes when a group of fraternity pledges break into the institution to get a photo of the serial killer. Seizing the opportunity, Malius flees and begins his bloody rampage once again.