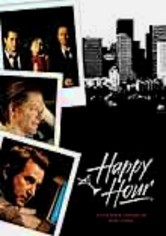 2004 NR 1h 33m DVD
Once, Tulley (Anthony LaPaglia) was a writer on the way up, destined to author the next great American novel. But then, life happened, and now he's an adman who has only one thing to look forward to: happy hour. Still, his best pal (Eric Stoltz) hopes he'll turn things around, as does Natalie (Caroline Feeney), the woman who believes in him. But even if he manages to find the will to write again, Tulley may not have enough time after all.

Parents need to know that this sitcom deals with both sexual and romantic relationships in various forms. It contains sexual innuendo and relationship jokes that will likely go over the head of young viewers -- thankfully, since some of them are pretty strong. Language can be coarse at times, and drinking (among adults) is a routine social event.

Contains strong sexual innuendo and some coarse references to genitalia and sex (much of which should go over the head of younger viewers). Shows semi-dressed adults waking up in bed together.

Mild, infrequent, and usually played for laughs. For example, a character throws an unseen punch -- the recipient of which wakes up with a black eye.

Highlights both drinking and sexual behavior. Strong women are depicted as confused, controlling, and/or bad. Amanda struggles with body image issues. Some people of color are seen during social settings, but none are among the main characters.

Adult consumption of wine, beer, and hard alcohol. Characters mix drinks on screen and make references to the strength of alcoholic beverages.