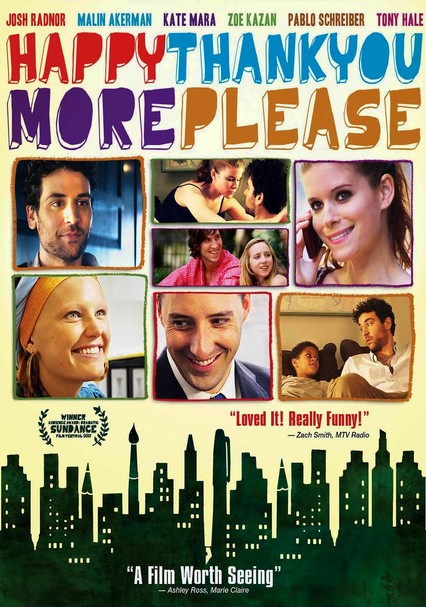 2011 R 1h 38m Blu-ray / DVD
On the way to meet a publisher, aspiring novelist Sam encounters Rasheen alone on the subway. While struggling to decide whether to send the young boy back to foster care, Sam looks after Rasheen and learns a few important life lessons.

Parents need to know that this indie romantic dramedy set in New York -- which was written and directed by star Josh Radnor of TV's How I Met Your Mother -- focuses on three young couples, each of whom is having some kind of relationship trouble. Teens may or may not be interested in the love woes of older characters, but most of the content is age appropriate for mature teenagers: There are several uses of "f--k" (the main reason for the movie's R rating), plus some drinking, flirting, and kissing (anything more intimate is implied rather than shown).

Characters spend a great deal of time flirting and kissing, with plenty of talk about relationships and sex. Sex is implied, but no sex or nudity is shown.

The movie ultimately has a positive message about the value and power of love and trust. Almost all of the characters begin the film emotionally hampered or withdrawn, but they all learn to love and let themselves be loved and to overcome their trust issues.

The main character uses an Apple computer, which is shown repeatedly but not mentioned by name.

Most of the adult characters are seen drinking in bars and/or restaurants, sometimes to excess. Their hangovers are played for humor.