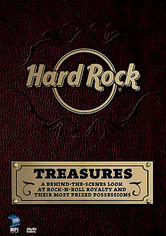 2006 NR 1h 30m DVD
Don Bernstine, the Hard Rock Café's director of acquisitions, leads viewers on a treasure hunt in this behind-the-scenes look at how the restaurant chain collects its rock 'n' roll memorabilia. Bernstine scours the globe for mementos -- from concert posters to musical instruments -- to adorn the franchise's walls. Highlights include a tour of the Hard Rock vault and appearances by members of Bon Jovi, Van Halen, Led Zeppelin, Aerosmith and more.