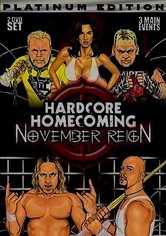 2005 NR 2 discs
Filmed in 2005 in Philadelphia's Bingo Hall, this jaw-dropping program redefines hard-core wrestling with a fight card of incredible matchups. Think you've seen it all? Watch what happens when brothers Ian and Axl Rotten tape their fists, dip them in glue and plunge them into buckets of broken glass -- and then head into the ring for one of the most violent matches in wrestling history, dubbed the Taipei Death Match 2.