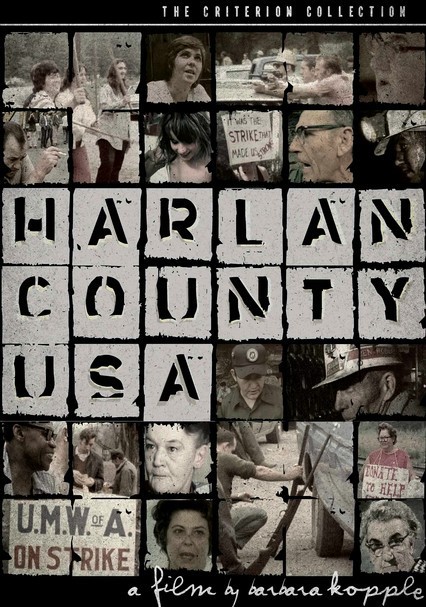 1976 PG 1h 43m DVD
Director Barbara Kopple's film about the 1973 coal miners' strike in Harlan County, Ky., won a Best Documentary Oscar and was selected for the National Film Registry. Highlighting the struggles of families living in shacks with no indoor plumbing and enduring hazardous working conditions, the film details the conflict between the Eastover Mining Co. and the laborers determined to join the United Mine Workers of America.

Parents need to know that Harlan County, USA is a riveting and intense 1976 documentary chronicling a 13-month miners' strike in eastern Kentucky that shows violent altercations between strikers and union-busters, as well as the funeral of a murdered striker where family members are expressing deep shock and sorrow. These scenes might be too much for younger viewers, but for teens and adults interested in the struggles and sometimes fierce battles between organized labor and big business, Barbara Koppel's Oscar-winning documentary is as good as it gets.

Brief, nonsexual nudity: a brief scene of miners taking showers after work, a mother giving her daughter a bath in a washtub.

During standoffs between the striking miners and the union-busting scabs, people on both sides brandish guns, rifles, and clubs. One of the scabs is shown firing a gun from his truck. Strikers are shown being arrested and roughly taken away by police. One of the strikers is murdered, and another striker points out where small parts of his brain are still on the road.

Occasional cursing: "S--t," "bitch," "son of a bitch." During a particularly heated exchange between one of the union busters and the strikers, a union buster uses the N-word; this is repeated later as a women supportive of the strike relays the confrontation to her colleagues.

By documenting the courage and determination of miners in rural Kentucky on strike for better pay and working conditions, the film sends a message about the power of the average person to stand up to multinational corporations, the government, and other powerful forces.