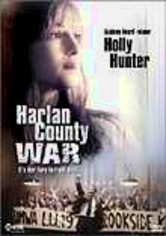 2000 NR 1h 44m DVD
Ruby Kincaid (Holly Hunter) is the wife of a hardworking coal miner in Harlan County, Ky., in the 1970s. After she witnesses two deaths, her husband's near-fatal accident and his subsequent fruitless battle with his employer, the Eastover Mining Company, Ruby decides to take matters into her own hands. With the help of a union organizer named Warren Jakopovich (Stellan Skarsgard), Ruby wages her own war on the Eastover Mining Company.