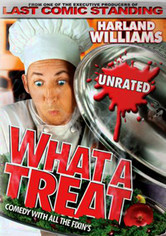 2006 NR 1h 10m DVD
Stand-up comic Harland Williams (a familiar face from films such as There's Something About Mary, Down Periscope and Sorority Boys) takes center stage at the El Rey Theatre in Los Angeles for a riotous evening of laughs. Featured topics in this gut-busting set range from everyman observations on fingernails and fried food to musings on dating and the Pillsbury Doughboy.