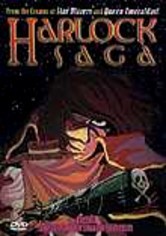 1999 NR 3h 0m DVD
This anime epic follows the adventures of space pirate Capt. Harlock as he searches for Alberich, a violent rebel who's stolen a stash of sacred gold and awakened the wrath of the gods, who now threaten to destroy the entire cosmos. Will Alberich succeed in using the golden ring he crafted from the treasure to dominate the universe, or can Harlock and his plucky crew stop the madman's plans before it's too late?