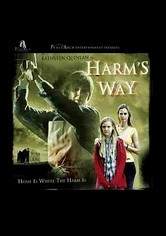 2006 NR 1h 23m DVD
After escaping from an abusive home, Mavis and her daughter Victoria (Hannah Lochner) take refuge at a remote women's shelter run by Bea (Kathleen Quinlan). But as the seemingly compassionate Bea befriends Victoria, the girl begins to turn against her mother. Now, Mavis finds herself in a fight for her life in this tense thriller directed by Melanie Orr. Ingrid Kavelaars and David Sparrow co-star.