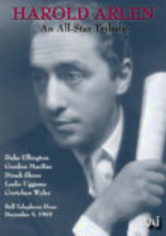 1965 NR 1h 0m DVD
Originally broadcast on television as part of "The Bell Telephone Hour," this 1965 concert pays tribute to one of the most celebrated composers in American history: Harold Arlen, the man who created the classics "Over the Rainbow," "Stormy Weather" and "Let's Fall in Love." Singing his praises via memorable performances, an all-star cast of entertainers includes Duke Ellington, Gordon MacRae, Dinah Shore, Leslie Uggams and Gretchen Wyler.