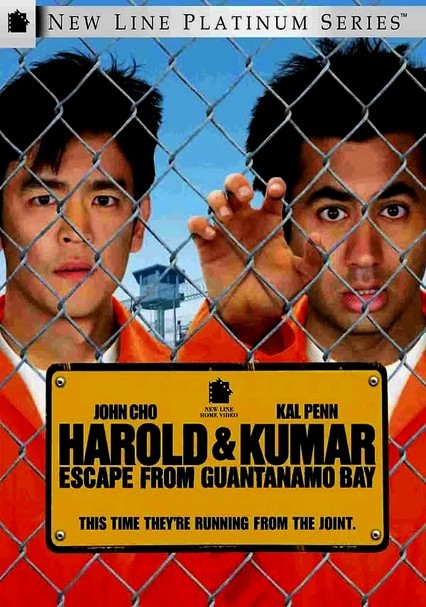 2008 UR 1h 42m DVD
Having satisfied their urge for White Castle, Harold and Kumar jump on a plane to catch up with Harold's love interest, who's headed for the Netherlands. But the pair must change their plans when Kumar is accused of being a terrorist.

Parents need to know that plenty of teens will want to see this marijuana-centric sequel, which goes out of its way to push buttons -- and that the filmmakers don't really worry about when to say when. Expect constant marijuana use, strong language (including "f--k," "p---y," and many more), broadly comic violence, and sexual content -- including both male and female nudity (topless and bottomless). That said, behind all the joking and the toking, there are some nice messages about real friendship, as well as some interesting observations about the racial and ethnic profiling that's taken place since 9-11 and the dangers of excessive law enforcement in the name of safety.

Plenty, but mostly intended for comic effect. Fatal electrocution by an electric fence; characters are held at gunpoint; fistfights and scuffles (including knees to the groin); one supporting character is shot with a shotgun, twice; a deer is shot, with blood spatter and a knife blow to finish the job; a prostitute is literally branded. Mace is used.

Extensive discussion of racism, stereotypes, and government policy; a characteer literally uses the Bill of Rights as toilet paper. Some government officials are seen as idiotic, petty fascists (with counterpoint from smarter, more reasonable government officials). Harold and Kumar (and their parents) are subjected to racist insults. Harold and Kumar stumble across a Ku Klux Klan meeting. A government agent taunts ethnic and religious groups with stereotypical objects of desire (grape soda for an African-American character; a bag of small change for two Jewish characters) in an effort to get them to talk; this, however, doesn't work and is depicted as the act of an idiot. From one woman's point of view, Kumar is seen in the beard and robes of a stereotypical Islamic fundamentalist (which, by turn, implies that she believes he's a terrorist). An actor depicting the president is seen drinking and doing drugs. A fair amount of toilet humor. On the plus side, the film's cast is diverse, and Harold and Kumar have a strong friendship.