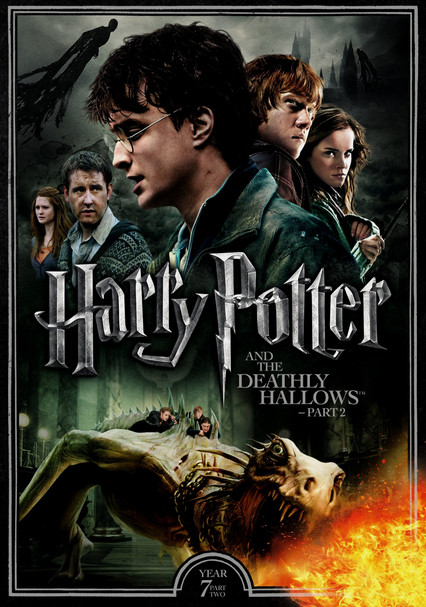 2011 PG-13 2h 10m Blu-ray / DVD
In the saga's final installment, Harry and friends continue their quest to vanquish Voldemort. Just as things begin to look hopeless, Harry discovers a trio of magical objects that endow him with powers to rival Voldemort's formidable skills.

Parents need to know that the epic finale of the Harry Potter movie saga is the deadliest, most intense, and most touching installment of the lot. Because the majority of the movie is an all-out battle between Voldemort and his army against Harry and his allies at Hogwarts, there's an extremely high body count -- including the deaths of several beloved supporting characters. Most happen off camera, but several bodies are shown. In a few scenes, everyone is bloodied and injured or dead, and it's brutal to watch (a shot of dead goblins is particularly gruesome, and one character's death at the fangs of an evil snake gets pretty gory). Despite the raging battle, Ron and Hermione at last find a moment to snog and spend most of the movie holding on to each other; Harry and Ginny also share a quick kiss. And in the end, it's not the violence that viewers will take away, but the idea that every hero, no matter how brave, needs loyal friends to defeat evil and that love lives on even in the face of death. Note: For the first time, a Harry Potter movie is being shown in 3-D in some theaters, making some of the action sequences even more intense.

After seven movies, Ron and Hermione finally kiss -- as well as hold hands, embrace, and protect/comfort each other in a romantic manner. A married couple holds hands before a battle. Harry and Ginny share a brief kiss, and one character proclaims his intent to tell a girl he fancies her, since they might be dead in a few hours.

This is by far the deadliest of the eight Potter films, with the highest body count and many upsetting deaths. Because the movie depicts the Battle of Hogwarts, the death toll is in the hundreds, including some favorite supporting characters. Their bodies are shown (eyes open, unmoving). The Gringotts break-in not only destroys the bank but also sparks bloody retribution from Voldemort (dead goblins are shown sprawled out). The Killing Curse is used, an evil snake kills an important character in a pretty gory scene with multiple bites and body slams, and a bully is enveloped in fire. Some bodies seem to disintegrate or burst. Harry, Ron, Hermione, and their friends face Death Eaters, Dementors, giants, huge spiders -- the whole of You Know Who's army. In one ethereal scene, the remains of a body are depicted as a gruesome newborn-like creature. Harry willingly faces death at one point in the movie.

As with all of the Potter movies, there are many positive messages, including the idea that every hero needs help to defeat evil; that everyone has a choice to do what's right, even if it's not easy; that some battles are greater than one person; that friends stand by each other until the end; and so much more. Different characters' choices illustrate selflessness, unexpected conscience, finding the courage to express love, and that people aren't always what they seem. And the Forbidden Forest sequence demonstrates how those we love always live on in our hearts, even after they're dead.

There's no product placement in the movie, but obviously Harry Potter-related merchandise is a huge money maker for Warner Bros. and J.K. Rowling.