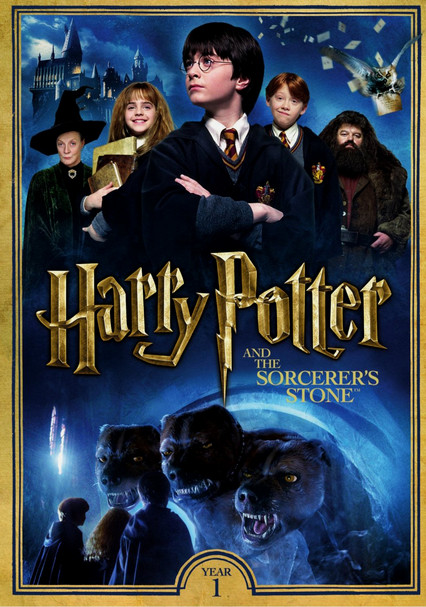 2001 PG 2h 32m Blu-ray / DVD
On his 11th birthday, orphaned Harry Potter learns he's a powerful wizard -- with a place waiting for him at the Hogwarts School of Witchcraft and Wizardry. As he learns to harness his newfound powers, he uncovers the truth about his parents' deaths.

Parents need to know that this first movie in the Harry Potter series has some intense and scary moments. Harry Potter and friends -- who are only 11 years old here -- are in peril and get hurt, but not seriously, and most of the scares come from fantasy creatures. There's a flashback to the (bloodless) death of Harry's parents and discussion about how they died and the one who killed them.

Kids are in peril often, mostly from fantasy creatures. A three-headed dog chases Harry and friends. Harry and Draco see a dead, bloody unicorn and are chased by a hooded figure in the Forbidden Forest. Harry and friends fight a troll and knock it unconscious, are nearly crushed by a constricting plant, are chased by flying keys, and pummeled by a life-sized chess board. One character dies by turning to dust. Mostly friendly ghosts roam the halls; the ghost Nearly Headless Nick shows how he got the name. Flashback to the (bloodless) death of Harry's parents and much discussion about how they died and the one who killed them.

"Mudblood" is a derogatory term used by pure-blood witches and wizards to describe a person born and raised by a non-magical family. The slur is derived from the idea that these people are incompetent, especially in terms of their magic skills, and possess "dirty blood."

Plenty examples of bravery and loyalty. Friendship, standing up for others, expressing compassion, generosity, and the triumph of the underdog are also strong themes.