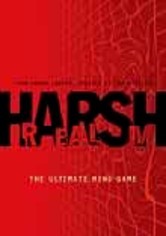 1999 NR 3 discs
Catch all episodes of this sci-fi television series produced by Chris Carter, who created the long-running hit series "The X-Files." Instead of FBI agents, however, the protagonist is a soldier (Scott Bairstow) who somehow winds up in a virtual-reality game. And the stakes are high as he fights a seemingly unending battle that culminates in a showdown with a ruthless officer. Terry O'Quinn, D.B. Sweeney and Max Martini co-star.