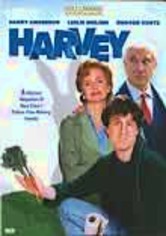 1996 UR 1h 30m DVD
Lovable lush Elwood Dowd (Harry Anderson) hits the pubs with his 6-foot invisible rabbit pal, Harvey, in this remake of the 1950 Jimmy Stewart film based on Mary Chase's play. Jovial Elwood embarrasses snooty sister Veta (Swoosie Kurtz) so much that she tries to have him committed. Instead, the asylum locks Veta up, leaving her there even after Dr. Chumley (Leslie Nielsen) deems Elwood insane -- that is, until the doctor himself spies Harvey.