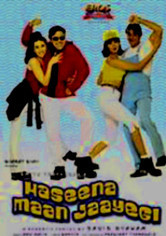 1999 NR 2h 22m DVD
Sonu (Sanjay Dutt) and Monu (Govinda), the spoiled-brat sons of millionaire Seth Armichand (Kader Khan), grow tired of their father's strict ways and decide to rob him. When they're caught in the act, their father separates them, forcing them to live in different cities. But even apart, the two brothers wind up in a mess of trouble, and in an attempt to help them out, Armichand gets kidnapped. Also stars Karisma Kapoor and Pooja Batra.