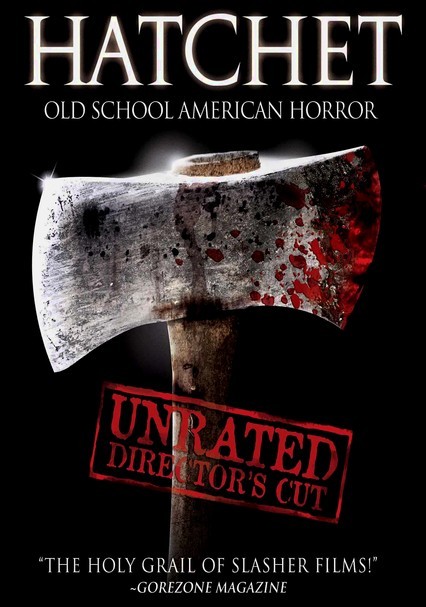 2006 UR 1h 24m DVD
When Ben (Joel Moore), his friend Marcus (Deon Richmond) and assorted strangers embark on a creepy nighttime boat trip into the bayou, their journey takes them into the lair of Victor Crowley (Kane Hodder), a freak of nature whose deformity has turned him into a bloodthirsty killer. Only Marybeth (Tamara Feldman), one of the travelers, holds the secret that may keep them alive. Horror legend Robert Englund co-stars in this comic gore fest.

Parents need to know that this gory, low-budget monster/slasher spoof is drenched in blood, including fake-looking but explicit dismemberments and beheadings. The first violent scene is typically sketchy (though it leaves bloody corpses), but later scenes are incessant, with blood spewing, lots of screaming, and limbs and heads flying. Weapons include a gun and sharp implements (chainsaw, hatchet), as well as gasoline and a lighter. There are frequent breast shots (part of a repeated joke about girls baring their chests for a "girls gone wild"-style video) and descriptions of adolescent male sex fantasies, with crude language. Swearing includes "s--t," "b--ch," and a select few "f--ks."

Lots of spurting blood and eww-inducing vomit/spit. Monster (hunchbacked, deformed, gooey, and nonverbal) attacks two men at the start, leaving exposed bloody body parts and pulling out entrails in close-up, with blood spatters. Description and flashback of father "whacking" Victor in the head with a hatchet (bloody). Alligator attacks boat party; Marybeth shoots it (more blood). Once Victor appears in the woods, the assault is nonstop, featuring jump edits, screaming, running, falling, bloody hacking, insides pulled out, heads cut off and bouncing, a chainsaw, and (of course) a hatchet. Bodies look as if Victor has eaten them. Weapons include a gun and sharp implements (chainsaw, hatchet), as well as gasoline and a lighter (monster set on fire).

Plenty of strong language, including multiple uses of "f--k" and "s--t" (with more in the Marilyn Manson song "This Is the New S--t," which plays at the beginning and end of the movie), as well as "bitch" (again, with more in song lyrics), "damn," "hell," "a--hole," "bastard," and "c--ksucker." Frequent obnoxious exchanges are peppered with "shut up" and "you suck."

Victims are rude, selfish, careless, and self-pitying; locals are demented (one is said to "drink his own piss"). An Asian character is especially stereotypical, soliciting a snide comment about "Uncle Remus meets Bruce Lee," with both terms being meant disparagingly.