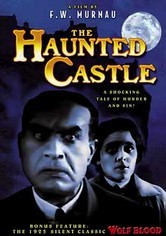 1921 NR 2h 2m DVD
In "The Haunted Castle," a suspected murderer crashes Baroness Safferstätt's stuffy party to reveal who really killed her husband, and in the silent film "Wolf Blood," the boss of a remote logging camp may be turning into a scary werewolf. F.W. Murnau and George Chesebro direct, and Arnold Korff, Lulu Kyser-Korff, Marguerite Clayton and Ray Hanford star in this double feature of early-cinema rarities.