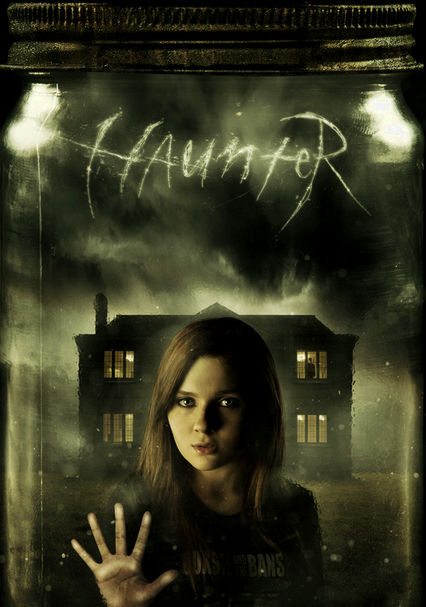 2013 NR 1h 37m Blu-ray / DVD
Putting a new spin on spooky, the haunted soul in this film -- 15-year-old Lisa -- is long dead, and the ghost she senses is a flesh-and-blood teen. Once Lisa figures out the score, she must help her real-life haunter unravel their house's secrets.

Parents need to know that Haunter is a kind of low-voltage ghost story that focuses more on characters and mood than on blood and gore. The plot involves a killer who has kidnapped and killed teen girls for years; now he does it as a ghost. Aside from vague descriptions of his acts, very little blood or gore is shown. There are a few scary ghost scenes (including one scene in which the main character's family seems to decompose and turn into skeletons), and characters shouting and throwing temper tantrums. Language is mild and includes uses of "son of a bitch," "hell," "Goddamn," and "bastard." Adults smoke cigarettes in a couple of scenes, and there are several 1980s brand names on display. This movie won't scare older teen horror fans, but it may be fine for sturdy younger teens looking for an introductory horror movie.

In the story, the villain has been kidnapping and killing teen girls for decades and he's a very creepy character; even after his death, he possesses the girls' fathers to continue his murderous streak. Outside of this violent idea, very little overt violence, blood, or gore is shown, though teens will still be very creeped out. There are a few scary "ghost" scenes, and a few scenes of fathers shouting angrily and throwing things around the room. In one scene, the main character's family is shown decomposing and turning into skeletons (they're fine in the next moment). In a climactic scene, the teen heroine tries to strangle the killer.

Language is very infrequent and includes "son of a bitch," "hell," and "Goddamn" a few times, plus "bastard" and "oh my God."

Helping others and appreciating one's family, despite their flaws, are the main positive messages. These are wrapped up in a scary story about a man killing teenage girls.

The movie has lots of 1980s artifacts, including rock posters and t-shirts (The Cure, David Bowie, Siouxsie and the Banshees), an Atari Pac-Man video game, Converse shoes, Monopoly and Risk board games, and a Rubik's cube. A scene that takes place in a modern bedroom includes an iPad (or some kind of tablet -- no brand name is shown).

In a couple of scenes, two father characters light up and smoke cigarettes.