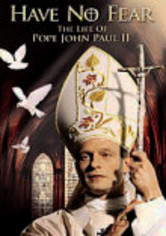 2005 NR 1h 27m DVD
Told via flashback, this affectionate biopic chronicles the life of Pope John Paul II -- born Karol Wojtyla in Wadowice, Poland, in 1920 -- from his early days to the papacy and beyond. The film touches on many of his formative experiences, including the loss of his family before he was 20, the Nazi occupation of his homeland, the ensuing holocaust and his years under communist oppressors. Thomas Kretschmann plays the globe-trotting pontiff.