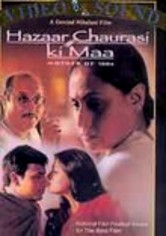 1998 NR 2h 32m DVD
When they learn that their son, Brati, has been killed, Dibyanath and Sujata Chatterji's world is immediately shattered. In an attempt to come to terms with the tragedy, Sujata investigates the life her son has left behind and learns it was much more complicated than she ever imagined. Based on Mahasweta Devi's novel, Govind Nihalani's touching melodrama stars Jaya Bhaduri and Anupam Kher.