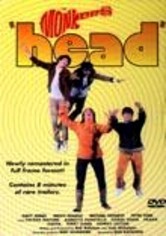 1968 G 1h 36m DVD
Released after their TV show's cancellation, The Monkees' one and only feature film is a surrealist exercise in late-1960s pop art. It's all about the adventures of Peter Tork, Davy Jones, Michael Nesmith and Mickey Dolenz in Hollywood. Director Bob Rafelson, veteran of the series, also co-wrote and co-produced Head with Jack Nicholson. Watch for Nicholson, Dennis Hopper, Teri Garr, Frank Zappa and many others in cameos.