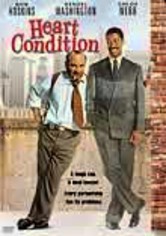 1990 R 1h 40m DVD
Bigoted police officer Jack Moony (Bob Hoskins) is taking revenge on a handsome lawyer named Napoleon Stone (Denzel Washington), who's caught the eye of Jack's hooker girlfriend, Crystal (Chloe Webb). Also getting under Jack's skin is the fact that Napoleon is black, which becomes more ironic when it's Napoleon's heart that Jack receives when the two are tragically hurt on the same night. Will Napoleon's ghost change Jack?