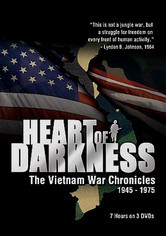 2006 NR 3 discs
Through rare footage and exclusive interviews, this comprehensive seven-part series explores the history of the Vietnam War, the longest military conflict in U.S. history, tracing the conflict's roots from 1945 to 1975. Episodes explore the defeat of the French Legionnaires, America's involvement and the turning tide of public opinion that prompted the eventual withdrawal of all troops from the region.