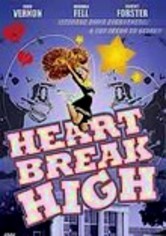 1981 R 1h 31m DVD
In this 1980s comedy, a season of Friday night high school football matchups comes down to one important game: the city football championship. Two longtime rival coaches and their teams prepare to fight it out on the gridiron for the coveted trophy … but a lot can happen before the opening kickoff. The students begin the battle with a pregame bout of one-upmanship to win advantage on the field. John Vernon, Norman Fell and Robert Forster star.