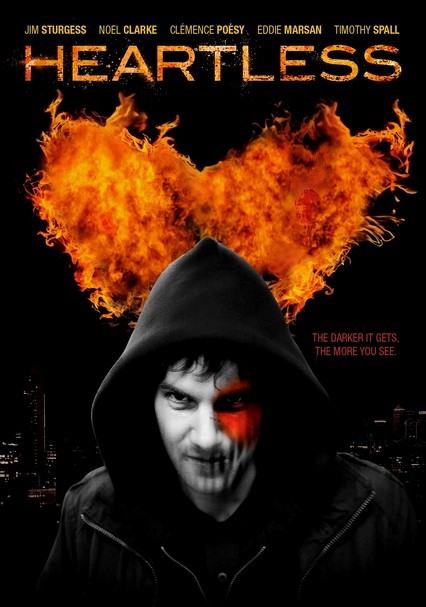 2009 NR 1h 54m DVD
Reclusive Londoner Jamie Morgan, who bears a prominent, heart-shaped birthmark on his face yet can't seem to find love anywhere, makes a deal with a devil-like figure to get a girl -- but there's a deadly price to pay.

Parents need to know that this bizarre British horror/fantasy from cult director Philip Ridley is filled with violent, terrifying images -- including plenty of blood and gore and people burning to death. The story is a classic deal-with-the-devil tale in which the hero pays an awful price to get what he wants -- but it also has elements of a sweet romance, and the main character learns to come to terms with the birthmark that has tormented him since childhood ... though not before he's done some pretty terrible things. Language is very strong, including near-constant use of "f--k," and there are some sexual situations, but no graphic nudity is shown.

The hero and his girlfriend have sex in bed (no graphic nudity). The hero brings home a male hustler, and there's some sexual innuendo. The hustler strips naked and is covered with plastic wrap, but again, no graphic nudity is shown.

Gangs prowl the London streets; they use Molotov cocktails to start fires, and characters are burned (one character magically tears off his blackened skin to reveal new skin underneath). One murder victim's chest is sliced open with a knife, and his heart is removed. Viewers also see guns, terrifying monsters with razor-sharp teeth, and severed heads that come to life. Characters fight, and there's lots of blood.

Characters use "f--k" and "f--king" every chance they get (which is very often!). Other words include "hell" and "bitch."

Jamie, who has spent his life hiding away due to his large birthmark, eventually conquers his fear -- leaning that beauty is only skin deep and that people can love him despite his appearance. But he goes to drastic means to learn this lesson and makes several seriously problematic choices in the process. Still, you could argue that Jamie's tale is a cautionary one and that viewers can learn from his mistakes.

Characters go out for cocktails on more than one occasion. The hero has a difficult time drinking hard liquor.