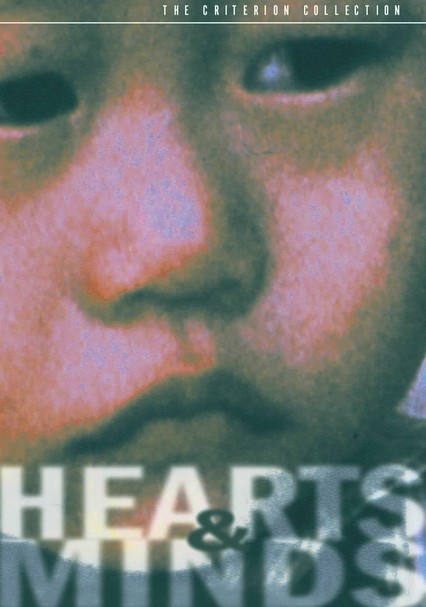 Parents need to know that Hearts and Minds is an intense 1974 Academy-Award winning documentary about the Vietnam War. Scenes from actual news footage is shown -- villages burned, dead bodies, and bloody injured soldiers -- as well as testimonials from American soldiers, some of whom are now paralyzed. American attitudes towards war in general are shown through brief clips of war movies. While many in the film freely use Vietnamese racial slurs, this documentary makes a concerted effort to understand the Vietnamese people and how they saw the war that was being fought.

Two American servicemen are shown in neighboring beds, cavorting with Vietnamese prostitutes. The servicemen remove the bras of the prostitutes, exposing their breasts.

The Vietnam War is graphically portrayed through news footage of Vietnamese soldiers being killed, villages being burned, and bombs falling from planes. Children are shown running down a road naked and screaming with parts of their skin peeling after a napalm attack. A Vietnamese prisoner is shown being kicked repeatedly in the chest and pistol whipped in the shoulder. In the rubble of a bombed-out house, a Vietnamese man cries and wails in agony, offering the shirt of his recently killed daughter to the American media to present to President Nixon. American soldiers home from the war tell frank anecdotes of their experiences in the war.

Hearts and Minds reflects the deep divisions in opinion about the Vietnam War, including the reactions and emotions of those who fought in it and those most affected by it. The result is a fairly clear anti-war message.

Men and women are frequently shown smoking cigarettes. During a large White House reception for recently freed American prisoners of war, President Nixon jokes that to toast every returning prisoner of war would require everyone to drink through the night and into the next morning, to which someone yells "What's wrong with that?"