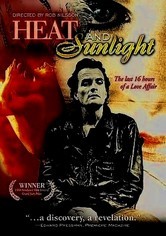 1987 R 1h 38m DVD
Set in San Francisco, this audacious indie film stars Rob Nilsson as Mel Hurley, a troubled photojournalist who can't seem to shake his jealousy and anger when his dancer girlfriend, Carmen (Consuelo Faust), dumps him. During the course of the next 16 hours, Mel tries desperately to salvage their failing relationship. The movie collected the Grand Jury Prize for drama at the 1988 Sundance Film Festival.