Heaven: Where Is It? How Do We Get There? 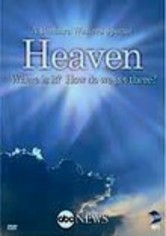 Heaven: Where Is It? How Do We Get There?

2006 NR 1h 20m DVD
Journeying from Dharamsala, India, to Harlem, N.Y., journalist Barbara Walters explores the meaning of heaven -- an idea that exists across almost every culture and ethnic group. In search of answers, Walters talks to religious leaders such as the Dalai Lama, Cardinal Theodore McCarrick and Imam Feisal Abdul Rauf, as well as scientists, people who say they've experienced heaven, and even terrorists ready to martyr themselves to get there.