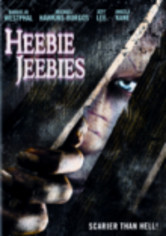 2005 R 1h 30m DVD
A young woman tries to save her friends from death at the hands of evil forces in this gory frightfest. Night after night, Cassandra (Bobbie Jo Westphal) suffers through nightmares in which her friends are murdered. Fearing her dreams will come true, she sequesters her friends in a remote cabin in the woods. But poor Cassandra can't protect her pals when the "shadow gods" materialize. Michael Hawkins-Burgos, Jeff Lee and Angela Kane co-star.